Luis Rengifo had a career-high four hits and drove in a run for the Angels, who had their second-biggest offensive performance of the season with 16 hits.

It was the seventh time this year Ohtani and Trout homered in the same game. Trout’s solo shot to left field in the fifth off Tyler Alexander (3-9) was his 30th home run of the season, marking the seventh time in his 12-year career he has reached that plateau. 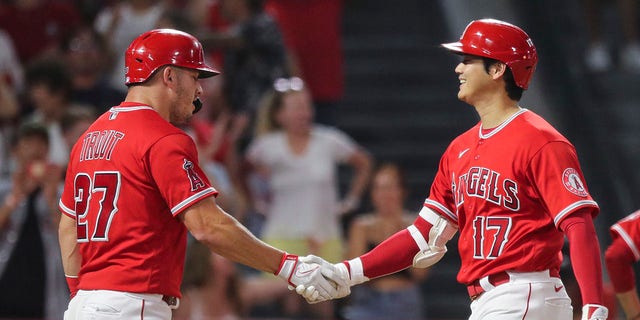 Shohei Ohtani #17 of the Los Angeles Angels celebrates his two-run home run with Mike Trout #27 in the third inning against the Detroit Tigers at Angel Stadium of Anaheim on September 05, 2022, in Anaheim, California.
(Meg Oliphant/Getty Images)

It marks the ninth time the Angels have had two players with at least 30 homers in a season. Ohtani has 32, including a two-run line drive in the third and a 416-foot solo drive in the seventh.

The two-way phenom from Japan — who had three hits and three RBIs — is second in the American League in home runs, 22 behind New York Yankees slugger and fellow AL MVP contender Aaron Judge.

Trout also had three hits and drove in a run. He is batting .302 (19 for 63) with six home runs since missing 28 games with left ribcage inflammation.

Suarez (6-6) struck out seven and went seven innings for the second time in 17 starts this season. The left-hander won his second straight start and is 5-3 since the All-Star break. 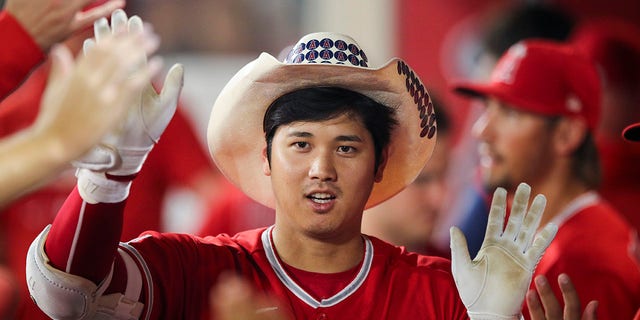 Shohei Ohtani #17 of the Los Angeles Angels celebrates his second home run of the game in the seventh inning against the Detroit Tigers at Angel Stadium of Anaheim on September 05, 2022, in Anaheim, California.
(Meg Oliphant/Getty Images)

SHOHEI OHTANI ACCOMPLISHES SOMETHING NO OTHER MAJOR LEAGUER HAS EVER DONE

Tigers rookie utility player Kody Clemens, the son of Roger Clemens, ended up pitching for the second time in three days with the game out of reach.

Clemens worked one inning and allowed one run on three hits. He did strike out Ohtani looking with a 68 mph eephus pitch.

Kody Clemens has pitched six times this year and has given up three runs on 10 hits in six innings. The strikeout of Ohtani was his first this season.

Tigers: INF Jonathan Schoop (right ankle sprain) will continue his rehab assignment at Triple-A Toledo after playing in two games over the weekend at Class A West Michigan. Manager A.J. Hinch said Schoop is progressing toward being activated for this weekend’s series in Kansas City. 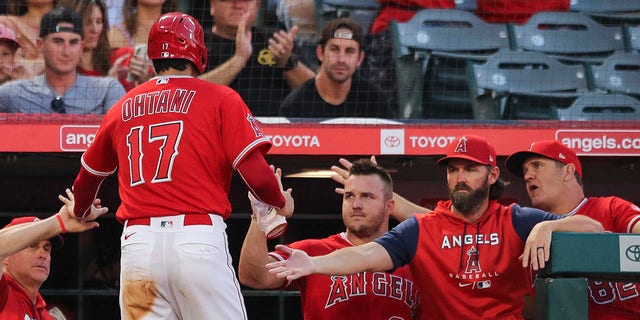 Shohei Ohtani #17 of the Los Angeles Angels celebrates scoring a run in the first inning against the Detroit Tigers at Angel Stadium of Anaheim on September 05, 2022, in Anaheim, California.
(Meg Oliphant/Getty Images)