The Connecticut Sun made no secret about wanting revenge against Chicago in the teams’ WNBA Playoff semifinal series, especially after the Sky sent them packing from the semifinals in 2021 while on the way to the title.

“We come up here every year and Chicago kicks our (***),” Sun forward DeWanna Bonner said of the Sky, who swept all four regular-season meetings. 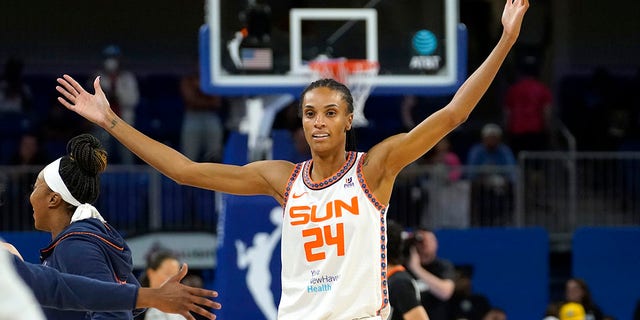 Connecticut got the revenge it sought as Jonquel Jones had 15 points and 10 rebounds and the Sun overcame an 11-point deficit in the fourth quarter, beating the Sky 72-63 Thursday night in the decisive fifth game of the semifinal series and advancing to the WNBA Finals.

All the Sun starters scored in double figures and Connecticut advanced to the Finals for the third time overall and first time since 2019.

Connecticut will face the top-seeded Las Vegas Aces for the WNBA title. The first game of the series is Sunday in Las Vegas.

Chicago was attempting to become the first team to repeat as WNBA champions since the Los Angeles Sparks in 2001-02. 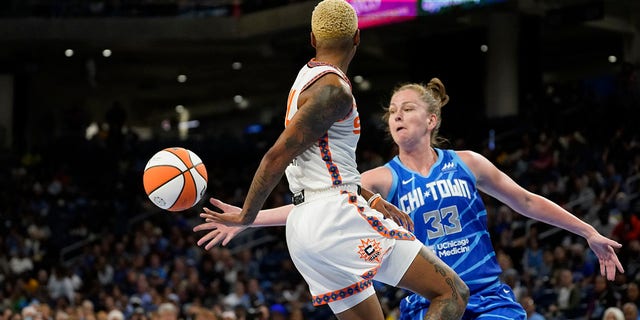 Connecticut Sun’s Courtney Williams passes behind her back as Chicago Sky’s Emma Meesseman defends during the first half of Game 5 in a WNBA basketball playoffs semifinal Thursday, Sept. 8, 2022, in Chicago.
(AP Photo/Charles Rex Arbogast)

Jones scored inside to put the Sun ahead with two minutes left, hitting an ensuing free throw for a three-point lead. Natisha Hiedeman tied the game with a transition layup with 2:24 left as Connecticut cut into its deficit in the fourth.

A pull-up jumper by Courtney Williams with 47.5 seconds remaining gave the Sun a five-point cushion, and DeWanna Bonner knocked down four free throws to put the game out of reach.

Connecticut outscored Chicago 25-5 in the fourth quarter, recovering from a disastrous third period in which it scored eight points and turned the ball over seven times.

“When adversity hits, sometimes we fold,” Hiedeman said. “Not no more, we’re not folding no more. As you all saw (after) the third quarter, we picked up right back up once again. Now we’re going to the championship. Job not done yet.”

Kahleah Copper led the Sky with 22 points on 8-for-19 shooting, including 3 of 5 from long distance, and added four steals.

DeWanna Bonner chipped in with 15 points, Hiedeman added 14 and Williams and Alyssa Thomas each added 12 for Connecticut.

Emma Meesseman, who finished with 14 points on 6-for-14 shooting and six rebounds, gave the Sky an 11-point lead with 7:20 to play.

Chicago coach James Wade called the late collapse “one of the biggest disappointments” of his professional career.

“We haven’t had a quarter like that, and to end the season off it, (that) didn’t display what we’ve actually done,” Wade said. “I just wish I could’ve got them a bucket and I just couldn’t. It’s just a tough feeling.”

In the opening half, the Sun continued the torrid shooting they had in Game 4, when they made 56.9% of their shots. But that slowed in the third quarter, as the Sky defense tightened. 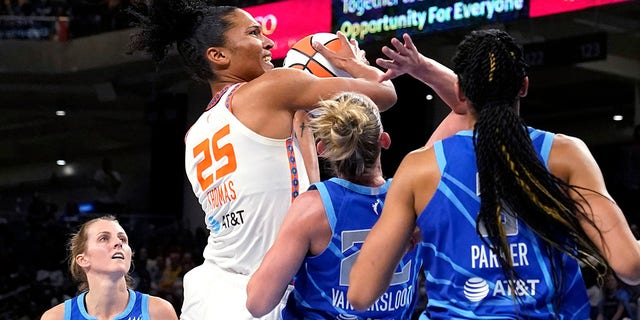 Candace Parker buried a 3-pointer and Copper followed with three-point play to give Chicago a 10-point lead entering the fourth.

But Chicago’s shooting went cold and the Sky missed their last eight shots.

“Of course it was not intentional, but maybe we stopped attacking,” Courtney Vandersloot said. “(Maybe) we were scared to lose, rather than trying to win. But I feel like we got good looks, we just didn’t knock them down.”

Miller called the Sun’s fourth quarter performance “historic,” but he is well aware his team will once again be considered underdogs in the final against Vegas.

“Not many people will pick us against Vegas either, and that’s OK,” Miller said. “We’re going to prepare and try to make it a Connecticut Sun style of game.”

To do so, he’ll rely on more stellar post play from Jonquel Jones, Alyssa Thomas and Brionna Jones.

“(Parker) is an incredible, all-time great in this league,” Miller said. “But I hope that someone writes (about how) the combination of JJ, AT and Bri Jones have knocked her out three of the last four years. I hope that post group gets credit for what they do, night in and night for us.”

Parker once again finds herself with a difficult decision over retirement after the 36-year-old decided to hunt back-to-back titles this year with Chicago.

“I’m going to go back and reevaluate whether I’m able to continue to play at the level that I hold myself to,” Parker said. “And I think that’s the biggest thing, I don’t ever want to cheat the game. I won’t cheat the game.”

Just as in 2021, Parker will take her time weighing her options during the offseason.

“So when I’m not able to go out and play and be the Candace that I want to be, I won’t play,” Parker said. “And I think that comes in the offseason.”

Parker, Vandersloot and Quigley all indicated they would make decisions about their basketball futures during the offseason.

All three of their contracts are set to expire. The same goes for Belgian forward Emma Meesseman, who joined the Sky on a one-year deal in February.

Quigley reflected on her tenure with the Sky and expressed gratitude for how she and Vandersloot, now married, came to meet in Chicago.

“I never imagined it ending up like this or having the career I had,” Quigley said. “Especially being able to do it in Chicago with my family, meet my wife, it’s unbelievable. I couldn’t ask for anything better.”

Connecticut’s 18-0 scoring run to end the game is the longest scoring run any WNBA team has mounted to finish a playoff game. … Chicago averaged over 40 points in the paint throughout the season, but scored just 24 on Thursday. … Parker added nine more boards to extend her all-time WNBA playoff record to 609 rebounds. She surpassed Tamika Catchings (598) on Tuesday.

Chicago will face the top-seeded Aces in Las Vegas in the opener of the WNBA Finals on Sunday afternoon.

What Is Donny Blaze's Marvel Comics Connection to 'She-Hulk'?