Ryan Connor (Ryan Prescott) is set to be caught out for his part in the Bistro robbery, a new Corrie spoiler video shows.

Despite dragging him into her plan in the first place, Debbie (Sue Devaney) is unable to prevent the truth from being revealed, as Nick, Leanne and Craig trawl through the CCTV.

Whilst she tries to convince them that it will be useless, they identify Ryan in the recording, which leaves them both in an awkward position. 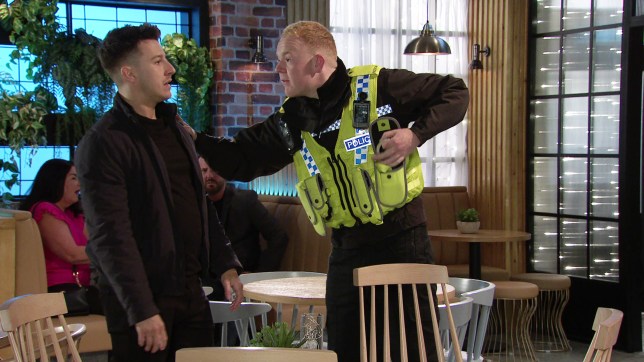 ‘I think he’s very calm in the beginning but as soon as it backfires and the police start asking questions he immediately regrets what he’s done.

‘The fact that Debbie was involved gives him a bit of security, she’s that bit older and wiser so he thinks surely she wouldn’t have come up with something that’s not going to work.’

However, Debbie chooses to stay quiet as Ryan is arrested, seemingly allowing him to take the blame.

One thing’s for sure: he certainly doesn’t share his mother’s luck when it comes to botched bistro burglaries…

But why was Ryan foolish enough to go along with the idea in the first place?

‘To him no one has got hurt, it’s a victimless crime and that’s the main appeal for Ryan, he doesn’t want to hurt anyone, it’s just an insurance claim.’ Ryan Prescott explained.

‘Ryan’s already convinced himself that there’s an opportunity in Ibiza for him, starting up a bar with some friends, if he can just come up with cash. So at that point he’s already tasting that familiarity of the only other home he’s ever had, he’s manifesting and he’s decided it’s his only way forward.’

Will Debbie come clean about her involvement in their plan, or will Ryan be left to face the music alone?