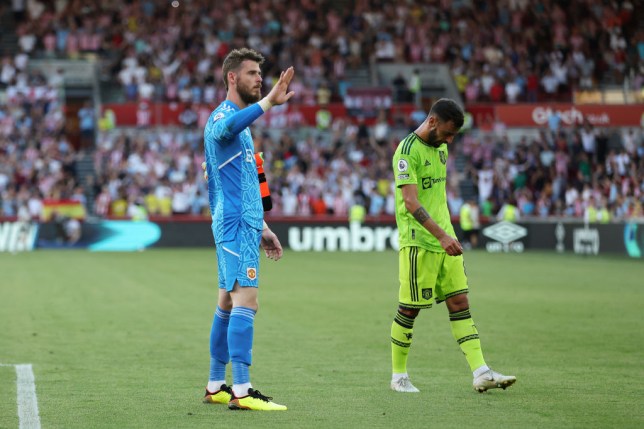 David de Gea took the blame for Manchester United’s humiliating 4-0 defeat at Brentford as they fell to the bottom of the Premier League for the first time in 30 years.

It is a new low for United, who are set to finish a day bottom of the Premier League table for the first time since August 21, 1992.

The painful result has seen Erik ten Hag become the first manager to lose each of his first two games in charge of United since John Chapman in November 1921.

De Gea made costly mistakes for Brentford’s first two goals, letting Josh Dasilva’s simple shot crawl under him at the near post after just 10 minutes.

He played a poor pass to Christian Eriksen as the Bees doubled their lead, with the goalkeeper putting the Denmark international under unnecessary pressure as he lost possession to Mathias Jensen.

‘I think I cost three points to my team today to be honest,’ De Gea said in a brutally honest post-match interview with Sky Sports.

‘It was a poor performance for myself. After the first mistake, and the second… it was a horrible day.

David de Gea asked to do the post-match interview after a horrible day for Manchester United ð´ pic.twitter.com/uYD65ErbQP

‘It can happen in professional football, the mistake that I made. I should have saved the first shot, and then the result probably would have been different.

‘I shouldn’t have played the ball to Christian Eriksen. Of course we try to play, but they press over the whole pitch. I should have read it better.

‘I cost us three points. It was an easy save, and it made it 1-0 to them. We have to react much better and be capable of scoring goals. It was a poor performance.

‘It’s too easy in pre-season when you play for nothing. In these games that matter you need bravery, you need to be consistent. It wasn’t the case today and I need to keep working.’

When asked about how United can turn this around, De Gea took a long pause before adding: ‘I’m not sure. [All the] teams are improving a lot, and it feels we are in the same place.’

United are said to view Leeds United’s Ilan Meslier as the ideal long-term replacement but accept he is unattainable this summer.