All across Appalachian Eastern Kentucky, the story of flood victims is the same: Homes that they had lived in for decades, properties that were safe for generations were wiped out by a 1,000-year flood of torrential rain.

“My papaw was almost 80 years old. He lost everything in the house that he has lived in since he was two years old,” says Lakyn Bolen, 26, a resident of Knott County, where 14 inches of rain fell. “It’s nothing that we’re used to, we don’t get stuff like this. And the thing is, a lot of the people in this area don’t have flood insurance because they’re not even in a flood zone.”

The flooded interior of Bolen’s grandfather’s house is covered in mud. The family has boxes of family photos and documents stacked on the bed that they attempted to save in Knott County, Kentucky, July 29, 2022.

Authorities are still counting the number of homes destroyed and people displaced across a swath of Appalachia. At least 38 people have died, including four children, with more still missing. The National Weather Service reported that the rainfall over July 26-29 was “historically unheard of,” with less than a one in 1,000 chance of it happening over any given four-day period in the region.

What comes next is less clear. The region is still suffering from power outages, a lack of clean water and destroyed roads. But residents tell TIME that they are determined to rebuild in the same areas—partly out of tradition, partly because they have no choice. However, many worry that the effects of climate change and the legacy of mining in the region mean that their homes will be vulnerable to being wiped out again.

“The history here is so long and rich. People say, why do people build in flood areas? You know, if you’ve been here, there’s not a lot of flat land, and it’s generational land that’s handed down to families. So of course, they’re going to put a trailer on the land they inherited from grandma,” Charly Wise, Executive Director of the Floyd County Chamber of Commerce, tells TIME. “Climate change changed everything.”

Read More: After Being Hit By Deadly Flooding, Kentucky Is Now Suffering High Heat and Humidity

Wise adds: “The damage from all the strip mining here for years took a lot away, a lot of the natural protection of the hills from getting flooded. A lot has changed.”

The unique topography of Appalachia consists of steep, rugged mountains that enable rain to move quickly and cause flash flooding because there’s not much soil to absorb the water. This phenomenon is made worse by the effects of climate change, which exacerbates severe weather.

“This is clearly not a local phenomenon, this is a result of climate change,” Chris Barton, a professor of forest hydrology and watershed management at the University of Kentucky, says. “When you have extreme heat, you get more evaporation, more transpiration, more moisture in the atmosphere. When that atmosphere becomes saturated, that water has to come down and unfortunately, when it comes down in a place, like it did (here) that’s not really adept at dealing with those types of rainfall amounts, the results are going to be devastating.”

Scientists also link mined mountains to faster flooding, which Appalachia is full of. Appalachia was the primary source of coal used in the U.S. until 1970, meaning the area’s mining history plays another major role in flooding.

“In the early 1900s, this country needed coal to build it,” Jim Stewart, a member of the Floyd County Community Foundation who’s been organizing recovery efforts, says. “We burned coal, that’s why we’ve got global warming, that’s why it’s warmer than it’s supposed to be. That’s why we’re getting more rain than we’re supposed to get.”

“This is my lifelong home where all my family is. What we’ve lost, it’s not materialistic things, it’s sentimental value. People have passed down their homes, passed their land to their children and their grandchildren. That’s what makes it home,” Danielle Eckles, Bolen’s sister and a Letcher County resident, tells TIME. “It’s not a house, it’s not a vehicle, it’s the people around you that you know, love you. People that don’t even like each other are helping each other in this time, because that’s what we do.”

Eckles fled her single-wide trailer with her husband and three children when the flooding began. All they had time to grab was baby formula and diapers. Eckles says the water was up to her calves by the time they got outside. The trailer was swept away by the flood shortly after. Eckles and her family are currently staying with loved ones, but plan to resettle somewhere in the area eventually. 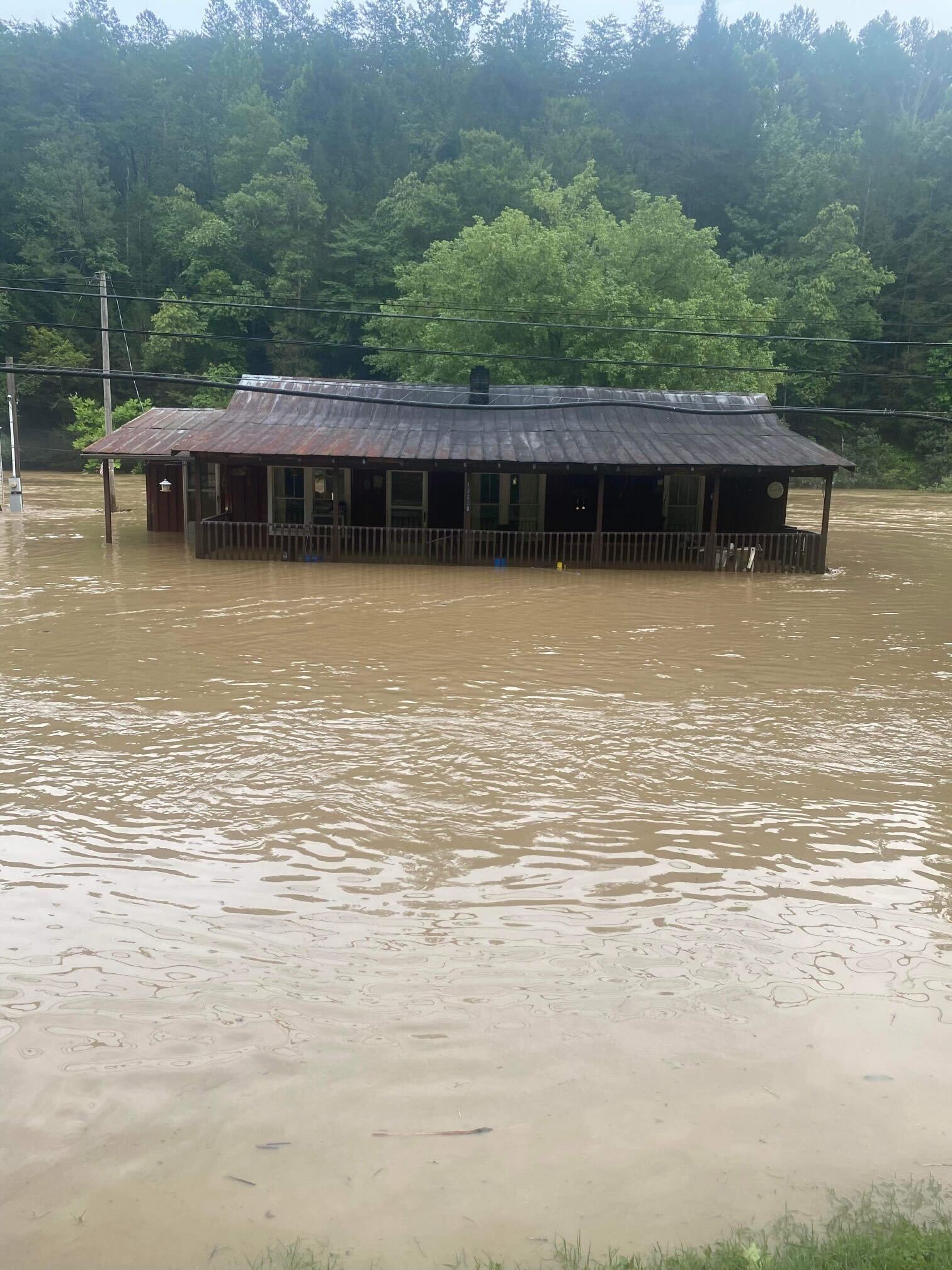 The view of Bolen’s grandfather’s house during the flood in Knott County, Kentucky, Aug. 2022.

The poverty rate in Appalachian Kentucky was 24.5% in the 2010s, compared to the national average of 15.6% at the same time, according to Fahe, a nonprofit that focuses on empowering Appalachian communities. The decline in coal mining work yielded generational poverty and low incomes throughout the region—which is a crucial factor considering that impoverished communities usually suffer the most damage from natural disasters.

“This is going to take time to recover,” says Bolen. “They’ve already estimated the cleanup to be five to seven years. Not only that, but the impact that it’s had on mental health in Appalachia, it’s unreal.”

Many residents of the region also said that they have had to deal with intensely negative messages across social media criticizing Appalachians following the floods. The commentary is rooted in misconceptions about flood patterns in the region, and a lack of understanding that the flooding has gotten worse.

“For people saying that we need to move out; ‘Why would we live somewhere where this stuff happens?’ We didn’t know this was gonna happen,” says Bolen. “People went to bed that night not knowing what was going to happen and a lot of people never woke up from their sleep because their houses literally washed down the road.”

Political affiliations have prompted similar hate speech. Eckles talks about how internet trolls express a victim-blaming mentality against conservative-voting flood victims. The region voted heavily in favor of President Donald Trump in 2016 and 2020—with up to 90% of residents supporting him. “[The flood] didn’t stop at someone’s house and ask who they voted for,” says Eckles. “It didn’t look at their ballot before it flooded their home.”

Wise mentioned a cartoon depicting the flooding published in the Lexington Herald-Leader, captioned, “When it rains, it rains on the poor,” that people in her community found offensive. Wise pointed out that even throughout Kentucky, Eastern Kentucky has a distinct reputation plagued with stereotypes. (The newspaper says that the cartoon was not meant to disrespect residents of Eastern Kentucky, but to lament the disaster that they faced.)

These old biases have also resulted in concerns that residents will not get the aid that they deserve. On Aug. 9, Kentucky Gov. Andrew Beshear blasted reports that the Federal Emergency Management Agency was denying claims for Eastern Kentucky flood victims. “Let me say to people applying for disaster assistance: No. 1, do not give up,” Beshear says. “No. 2, if you’re denied, go and look these people in the eye.

Local politicians have highlighted that some payouts are just a few thousand dollars—far too little to rebuild and replace a lifetime worth of belongings.

Wise, Eckles, Bolen and Stewart were all born and raised in Eastern Kentucky and it’s where they intend to stay. They agree that it’s going to take creativity to adapt to the evolving environment of 21st-century Appalachia.

“Intuitively, I would say, you’re probably asking for trouble if you’re gonna stay there if these types of storms are going to become more and more frequent, but at the same time, there’s a real sense of place,” says Barton. “With that thought in mind, you really do want to look and see what alternatives there are; Different types of housing, can you move them up the side of the mountain just a little bit.” 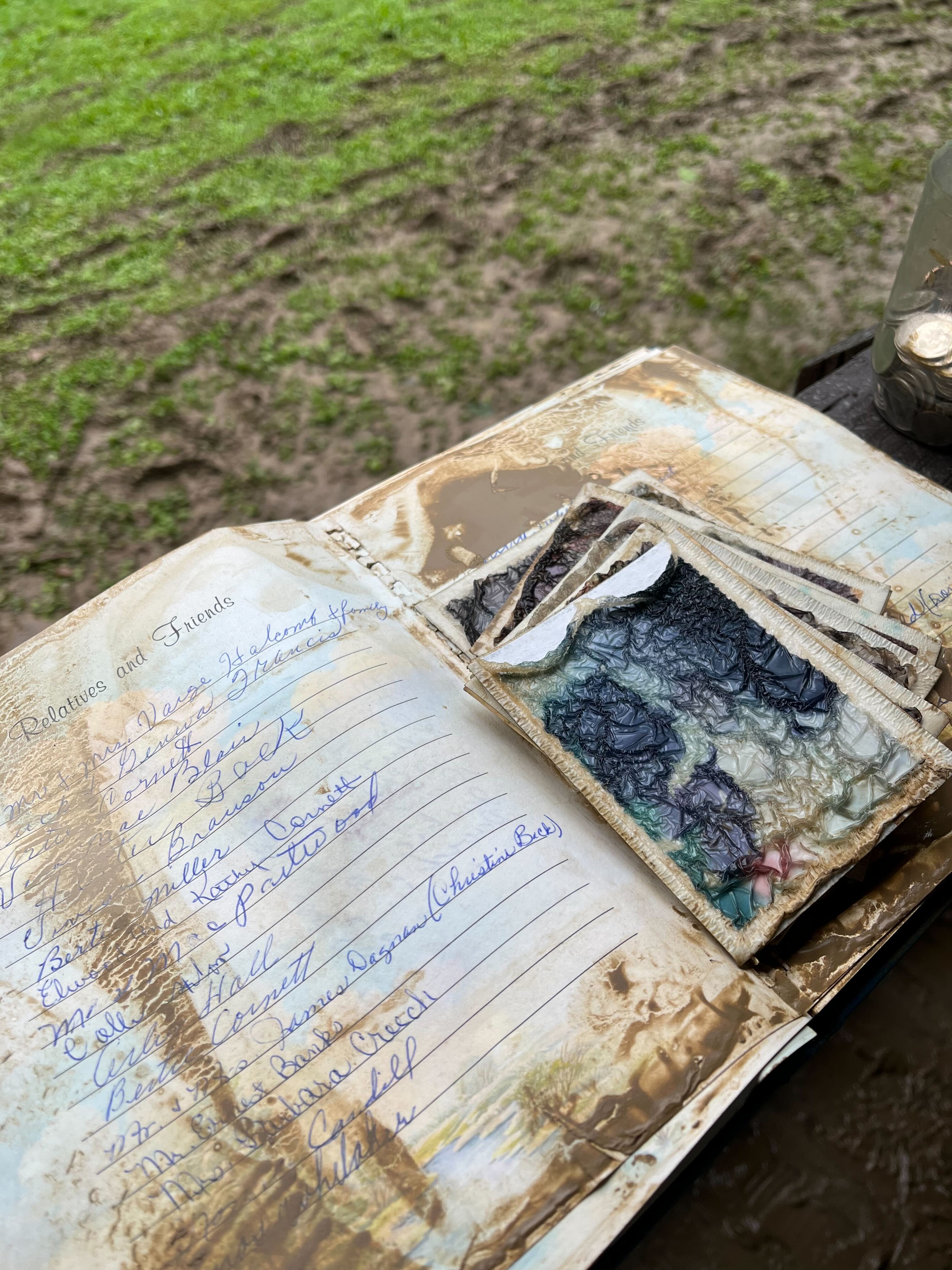 Many Appalachians cherish a “family bible,” a book recording details about the family lineage going back generations. Bolen’s family dries out theirs after it was ruined by the flood, Knott County, Kentucky, July 29, 2022.

The Kentuckians explained that people may disagree with their choice to rebuild and stay somewhere becoming increasingly dangerous, but that every landscape is changing and they are incredibly capable of adapting to stay in one of the most special places in the world.

“The people of Appalachia are very resilient and we will overcome it,” says Bolen. “I have no doubt in my mind that we’ll just come back better than we were.”

You’re not that special (I swear, there’s a startup angle here) – TechCrunch