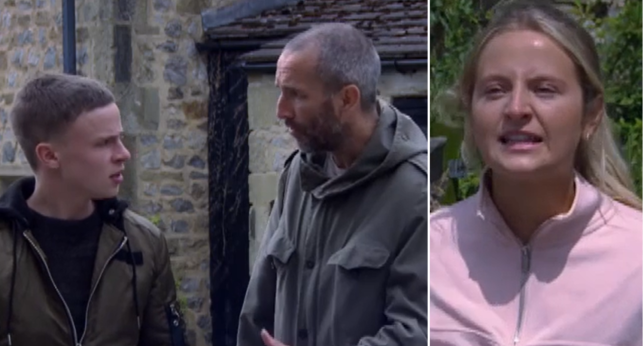 Tensions are rising between the families (Picture: ITV)

Poor Amelia (Daisy Campbell) faced the wrath of Samson (Sam Hall) in tonight’s Emmerdale as she refused to get rid of her baby.

Despite Sam (James Hooton) and Lydia’s (Karen Blick) words of advice, Samson was still determined to convince the pregnant teen not to keep their child as he paid the Spencers a visit.

During a one on one confrontation, things between the expectant parents got heated, as Amelia tried to explain that, at 25 weeks, it was too late for her to have an abortion.

In the village, Sam and Dan’s (Liam Fox) civil conversation was disturbed as the youngsters’ argument spilled out onto the street, with Samson demanding that Amelia have the child adopted.

Still refusing, he blamed her for trying to ruin her life.

As Sam and Dan stepped in, things got even worse.

Amelia made it clear that she wished Samson was more like his cousin Noah (Jack Downham), who had formed a friendship with Amelia over the past few weeks, supporting her through the pregnancy.

In a harsh blow, Samson retorted that he wished Amelia was more like his mum: Dead.

Things only got more heated from there, aa Dan attacked the young Dingle, with Sam getting involved in his defence.

Is this the beginning of a downward spiral for the Dingles and the Spencers, or will they eventually see sense and band together for the sake of the baby?

MORE : Emmerdale spoilers: Chas ups the stakes as Al gives her a burner phone to arrange ***