If Thursday’s meeting was any indication, it might be a while before sports betting gets underway in Massachusetts. 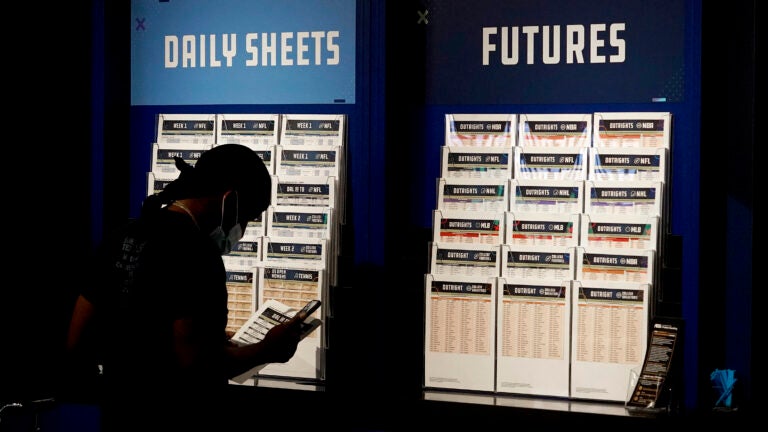 From the moment Gov. Charlie Baker formally signed the bill legalizing sports betting in Massachusetts, the question in the minds of prospective local bettors changed from “if” to “when.”

Answering exactly “when” someone will be able to legally place a sports bet in the state is still impossible to know exactly, though if the plodding pace of Thursday’s meeting of the Massachusetts Gaming Commission was any indication, it won’t be anytime soon.

Meeting for more than six hours, the commission continued its steady slog to establish a regulatory framework for sports betting. Among the issues discussed was how imperative it is — or is not — to establish a legalized sports betting system quickly, what relationship it might have with the state’s lottery, and how strenuous the regulations should be in Massachusetts vs. the rest of the country.

Here are a few takeaways:

Why ‘Toucher & Rich’ was mentioned during the meeting

One of the notable soundbites produced by Thursday’s meeting began when Commissioner Brad Hill described a point of “frustration” he felt hearing a local radio segment during his commute into Boston.

“[It was] a 40-minute ride that took almost an hour and 45 minutes to get in. Lot of traffic,” Hill recounted, “which allowed me to be able to listen to sports radio longer than I normally do. And as I was tuned into 98.5 today, I was listening to the ‘Toucher & Rich‘ show, which is a very entertaining show.

“But today I actually got a little frustrated with it because they had a guest on and they were talking about sports betting and they made a comment that some think we might be able to make a bet in three weeks at our brick and mortar casinos and our simulcasting facilities, and obviously that’s not going to happen and it was frustrating because of the hundreds of thousands of people that listen to that show and think that they might be able to place a bet here in Massachusetts.”

In response, the official Twitter account for “Toucher & Rich” pointed to Dan Lifshatz, a producer and betting analyst for “The Sports Hub,” for having given the misinformation. Lifshtaz responded by explaining that his comments were not meant to be taken as sourced reporting, and that he had simply heard a rumor.

What’s the latest on the timeline?

While the meeting was productive in the early crafting of what will eventually be more than 200 regulations pertaining to sports betting, little was said about a specific timeline.

Local casinos, like Encore Boston Harbor, have said that they could be ready for in-person sports betting in approximately six weeks whenever the commission releases an official launch date. Yet as was made fairly (though not definitively) clear by the detail-oriented discussion of regulations, the likely timeline is probably more a question of months than weeks.

“Other states who have done this, it has taken a while for them to be able to put regulations together, and in some cases — as was mentioned — up to two years,” Hill said. “I’m not saying that’s what’s going to happen here, obviously, but I hope that the media can understand that putting information like that out to popular shows is very harmful to the process I think, and if they want the information, the correct information, they can tune in to us almost weekly from this point on and get updates in what’s going on.”

One issue the commission confronted was the question of adopting “emergency regulations,” which would allow for a faster process while sacrificing a standard procedure of holding a public comment period before the regulations were put into effect.

Cathy Judd-Stein, the chairperson of the commission, offered a justification for the streamlined nature of emergency regulations.

“I meant to remind the public that right now there is no legal platform in Massachusetts to bet on any sport event,” Judd-Stein explained. “There are nefarious organizations who are trying to reach out to those individuals because they’ve heard sports wagering has been legalized. You won’t get the customer protections that we’re going to offer you through the system that we’re planning on organizing right now if you bet today on one of those platforms that is not regulated. They may suggest it is pursuant to law. The law is in place. Our regulatory framework is not yet in place.”

“So I really do think that there is a public safety and a public welfare issue here,” she added.

Eventually, an emergency regulation was voted on (4-0 in favor, with one abstention) to begin partnering with two companies that specialize in certifying gambling machines.

Commissioner Nakisha Skinner, the lone abstention from the vote, stressed the need for a public process as “important.” Fellow Commissioner Eileen O’Brien was also apprehensive at potentially using emergency regulatory power beyond what might strictly be necessary, adding that “it is going to be a [regulation]-by-[regulation] question for me.”

Commission general counsel Todd Grossman noted that under a normal process, there would be a 60-90 day period between when the regulation was approved and when it would take effect. Using the emergency method, the regulation would go into effect immediately.

Sports betting and the lottery

“As you draft sports wagering regulations, I urge you to incorporate provisions that will enable the lottery to continue to deliver consistent revenue and, as a direct result, valuable resources for every community in the Commonwealth,” said Goldberg.

The lottery, as Goldberg said, “plays a vital role in generating unrestricted local aid for our cities and towns, and it is imperative that we work to ensure it continues to do so.”

“I seek sports wagering provisions that mirror the regulations governing the existing gaming licenses,” added Goldberg, “specifically, requiring that prior to receiving a license applicants present a plan to mitigate any impacts on the lottery and requiring that licensees’ partner with the lottery on cross-promotion, both in-person and online.”

Later in the meeting, during a presentation of a major study of the social and economic impacts of gambling in Massachusetts, Dr. Rachel Volberg of the University of Massachusetts Amherst broke down the disparity between state lottery revenue and the expected revenue from sports betting.

Get the latest Boston sports news

Receive updates on your favorite Boston teams, straight from our newsroom to your inbox.

Wave Browser: What is it and is it Safe to Use?