Poliovirus has been detected in wastewater samples in New York City, suggesting likely local circulation of the virus.

The findings suggest there is likely a local circulation of the virus. In some cases, polio can lead to permanent paralysis of the arms and legs and even death.

“We are dealing with a trifecta. Covid is still very much here. Polio, we have identified polio in our sewage. And we’re still dealing with the monkeypox crisis,” New York Mayor Eric Adams said Friday on CNN’s New Day. “We’re addressing the threats as they come before us and we’re prepared to deal with them and with the assistance of Washington, DC.”

Health officials acknowledge that most Americans are protected from polio because of vaccination. The primary series of three vaccines provides 99 percent protection. However, unvaccinated and under-vaccinated people are vulnerable.

“For every one case of paralytic polio identified, hundreds more may be undetected,” State Health Commissioner Dr. Mary T. Bassett said. “The detection of poliovirus in wastewater samples in New York City is alarming, but not surprising.” 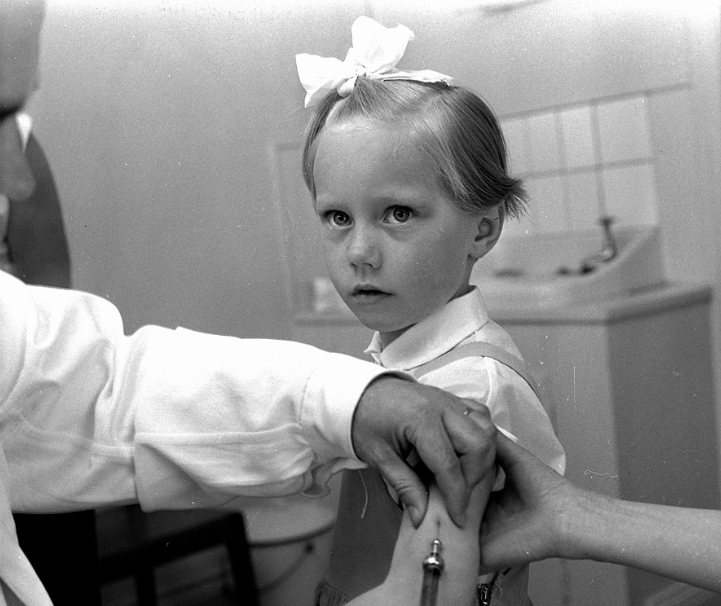 In 1957, children received the Salk vaccine which involved the administration of three injections over a period of time. Kids today are lucky – It is an oral vaccine. Credit – Örebro Kuriren, Public Domain

Polio is usually spread through feces and, in less common circumstances, when a person infected with the poliovirus sneezes or coughs. According to the World Health Organization, nearly 90 percent of people with polio do not show any symptoms.

Some have flu-like symptoms such as sore throat, fever, tiredness, and nausea, which is a common finding in a lot of diseases. However, about 1 in 25 people will get viral meningitis, an infection of the covering of the spinal cord and/or brain, according to the CDC.

About 1 in 200 people will have paralysis and be unable to move parts of their body or will feel a kind of weakness in their arms, legs or both. Even kids who fully recover from the initial disease can develop muscle pain and weakness years later.

Paralysis can lead to a permanent disability and death since polio can affect the muscles used to breathe.

The state Health Department said in its statement the discovery of the virus underscored “the urgency of every New York adult and child getting immunized, especially those in the greater New York metropolitan area,” reports the New York Times.

The announcement came three weeks after a man in Rockland County, N.Y., north of the city, was diagnosed with a case of polio that left him with paralysis. Officials now say polio has been circulating in the county’s wastewater since May.

“The risk to New Yorkers is real but the defense is so simple — get vaccinated against polio,” Dr. Ashwin Vasan, the New York City health commissioner, said in a statement. “With polio circulating in our communities, there is simply nothing more essential than vaccinating our children to protect them from this virus, and if you’re an unvaccinated or incompletely vaccinated adult, please choose now to get the vaccine.”