An man believed to be responsible for at least two *** assaults in Manhattan and Brooklyn has been arrested, police said.

Estarling Martinez Cabral turned himself in to a Brooklyn stationhouse Friday morning, according to police officials. Cabral, of Flatbush, was charged with attempted *** and *** abuse in connection to an attack on the Upper West Side.

In that July 20 incident, a 33-year-old was walking on West 69th Street when a man on an electric scooter came from behind, dragged her to a secluded area and tried to *** her, officials have said.

Police say a man wanted in a *** attack on the Upper West Side is the man seen here at the Carroll Street subway station in Brooklyn.

Charges are pending against the 20-year-old also for a separate attack at a subway station in Carroll Gardens. Police said the suspect in that incident came from behind the 20-year-old woman and grabbed her, then started groping her. He put his hand over her mouth to keep her from screaming, they say, but she was able to shout after a struggle and the man ran off.

Video was previously released by police showing the suspect in the July 23 Carroll Street subway attack as he enters the station.

A 33-year-old woman walking on a Manhattan street was grabbed from behind by a man on an electric scooter and dragged to a secluded area, where the man tried to *** her, the NYPD said Thursday.

Although Cabral is in custody, the NYPD is still trying to track down another man wanted in a series of *** attacks in Manhattan. The pattern dates back to May, but two of the attacks happened an hour apart in Manhattan on July 16.

Police added a May 15 incident on the Manhattan Bridge walkway to that pattern. The most recent cases were equally chilling.

The first attack on July 16 happened around 5 a.m. near Avenue A and East Fourth Street. Video shows the 28-year-old victim walking in the cross street, a man on an electric bike weaving in and around the lines on the pavement around her. He almost appears to bump into her at times, then swerves away.

She crosses the street and the footage cuts to another location. The woman is seen walking underneath a construction façade, along the sidewalk. Suddenly, someone is seen running from behind and tackling her. Police say he told the woman he had a knife and forced her to perform oral ***. He never showed the weapon, they said. He fled the scene on his bicycle. 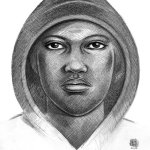 Police released this sketch of the man wanted in three attacks.

An hour earlier, cops say the same man attacked a 23-year-old woman around 4 a.m. near Central Park West and West 82nd Street. Again, he approached from behind and pulled her to the ground, police said. A struggle ensued. Cops say the suspect held the victim down and *** assaulted her. He ran off on foot, then was seen a short time later traveling southbound on Central Park West on an electric bicycle. That victim had abrasions to her body and was taken to a hospital to be evaluated.

Each of the victims was evaluated or treated for various injuries.

Most of the nearly half-dozen attacks between the two suspects have been partially caught on surveillance cameras, with shocking footage showing unsuspecting women walking along the street and getting tackled from behind by men on electric scooters or bicycles.

Anyone with information on the suspect is asked to call Crime Stoppers at 1-800-577-TIPS.