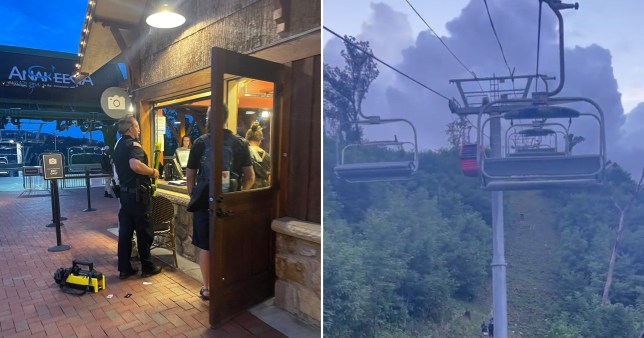 A woman fell from a chairlift ride at the Anakeesta theme park in Tennessee (Pictures: Twitter/@jayfoldsfive)

A woman reportedly fell 30 feet from a theme park ride and was found dead under the chairlift.

The woman believed to be in her 20s was about three-quarters up the 60-foot ride at the Anakeesta outdoor adventure hub in Gatlinburg, Tennessee, when she plunged around 7.30pm on Thursday, witnesses told WVLT.

Witnesses said she ‘jumped from the chairlift’, according to city official Seth Butler.

Her body was found under the attraction.

The ride continued operating after the incident.

‘You could see the concern on everyone’s face that was getting on,’ another witness, Jay Deuro, told the TV station.

Anakeesta representatives said they kept the chairlift running in order to get all the riders off.

‘We mourn this tragic loss of life,’ stated the theme park. ‘Our deepest sympathies are with the family.’

Amid an ongoing investigation, the police department has determined that the woman possibly killed herself.

She has not been identified.

The ride was closed on Friday and the Tennessee Department of Labor and Workforce Development is in the process of inspecting it for mechanical issues, according to WBIR. Authorities said the investigation could take up to two months.

Permits for the ride expire on August 4, and it was last inspected on April 21, Chris Cannon of the Department of Labor and Workforce Development told WVLT. A new permit for the chairlift was approved prior to the incident.

The chairlift is set to be turned back on for rides on Saturday.

Thursday’s death comes after a mother and her two daughters fell off a chairlift at a ski resort in Colorado in January 2017. The three fell about 25 feet into snow beneath them. The mother, Kelly Huber, 40, was pronounced dead at the scene while her nine-year-old and 12-year-old daughters were hospitalized. Officials said a safety bar was not lowered down during the ride.