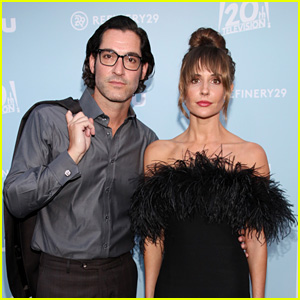 Tom Ellis is playing the role of supportive husband for his latest appearance!

The 43-year-old Lucifer actor walked the red carpet with his wife Meaghan Oppenheimer at the premiere of her new Hulu series Tell Me Lies on Thursday night (September 8) at NeueHouse Hollywood in Los Angeles.

Meaghan is the showrunner for the new series, which counts Emma Roberts as an executive producer.

The series is based off the best-selling novel and follows a tumultuous but intoxicating relationship as it unfolds over the course of 8 years. When Lucy Albright (Grace Van Patten) and Stephen DeMarco (Jackson White) meet at college, they are at that formative age when seemingly mundane choices lead the way to irrevocable consequences. Although their relationship begins like any typical campus romance, they quickly fall into an addictive entanglement that will permanently alter not only their lives, but the lives of everyone around them.

Make sure to check out photos of the rest of the cast at the premiere!