Tom Hardy spotted at UK nature-based festival with ties to Spain #Tom #Hardy #spotted #naturebased #festival #ties #Spain Welcome to Viasildes, here is the new story we have for you today:

ONE of the world’s most recognisable Hollywood A-list stars, Tom Hardy, popped up at a nature-based festival in the UK and the event founder has links to Spain.

The nature-based ‘Into the Wild‘ festival, which was held on the Chiddinglye Estate, East Grinstead, Sussex, included a visit from Mad Max star Tom Hardy and a Costa del Sol local.

Venom star Tom Hardy was among those that attended the event, which was held over the UK’s bank holiday weekend at the end of August.

Also at the nature-based festival was Valerie Williams, the mother of the event’s founder, Huw Williams.

Valerie lives in Andalucia’s Mijas and is an admin of the popular Simple Thriving Group on Facebook.

Making the trip over from Spain, Valerie shared pictures of her family together at the festival.

“The family together,” she wrote on August 28. Alongside, she shared pictures of her and her family.

The sight of Warrior star Tom Hardy was the talk of the festival, with Valerie sharing a video of her son and the British-born actor alongside the words: “You brought a lot of joy to a lot of people and to so many children this weekend Huw and especially to me, thank you.

“So so wonderful, so successful, such hard work for you, Bri and all your team.”

“It’s really cool and he just comes along and buys tickets with his family.

“We don’t have bars and I think that’s why Tom comes because he doesn’t drink so it’s a really nice, safe family environment.

“He’s been a few times with his kids, his wife and he’s brought a few friends as well.

“He’s really sweet and it’s good because people don’t bombard him and queue up for photos.

“I just went up to him and thanked him for coming and said that if he wanted to come and stay next time that we can do that.

“I got him one of our T-shirts that I designed. He chucked it on and loved it, he said let’s have a photo.

“He’s a really nice guy, everyone who met him said how lovely he is.” 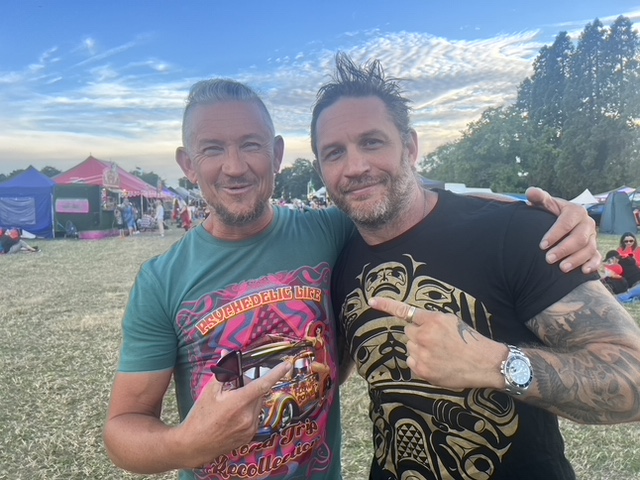 The festival was extremely popular with “1,500 kids and loads of families” enjoying workshops, bushcraft, kids activities, storytelling, dance, yoga and live music in the Sussex sunshine.

Into the Wild’s Huw Williams said: “We’ve been going for about eight years, we started with 150 people and now it’s nearly 5,000.

“We were one of the first festivals to not have bars, which is quite a risk as they’re real money makers, but actually it’s attracted a certain crowd that really enjoy it.

“The odd person might have a drink, we don’t ban it outright but we don’t encourage it.”

Porsche IPO triggered, could happen this month or next