When The Queen visited Coronation Street, EastEnders and Emmerdale | Soaps #Queen #visited #Coronation #Street #EastEnders #Emmerdale #Soaps Welcome to Viasildes, here is the new story we have for you today: 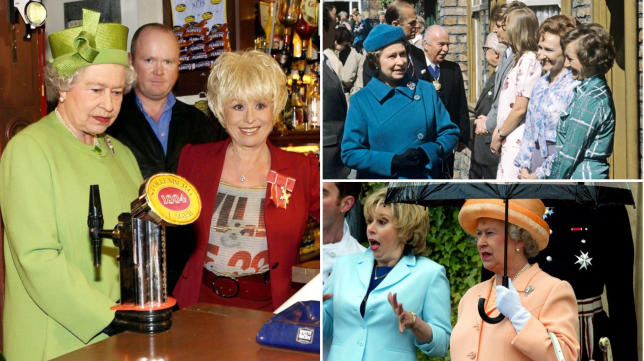 The Queen visited the sets of the UK’s biggest soaps over her tenure on the throne (Picture: PA)

Queen Elizabeth II paid a number of visits to the sets of the nation’s biggest soap operas during her remarkable 70 year reign.

Her Majesty died peacefully on Thursday at the age of 96 at her Scottish home in Balmoral, after an incredible seven decade tenure on the throne.

News of her death came after it was announced that she was under medical supervision and ‘comfortable’.

Buckingham Palace said in a statement at around 6.30pm: ‘The Queen died peacefully at Balmoral this afternoon.’

Celebrities from across the globe paid tribute to the Queen in the wake of her death and TV schedules have been altered, with popular soaps EastEnders, Emmerdale and Coronation Street being pulled on Thursday.

The Queen visited the sets of the aforementioned soaps at various points throughout her career, with her latest visit to soapland being just over a year ago. 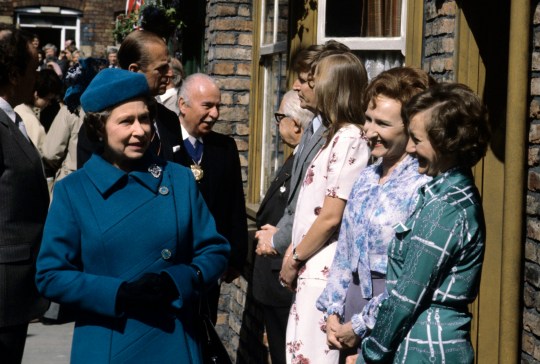 The Queen first visited the set of Coronation Street back in 1982 (Picture: PA) 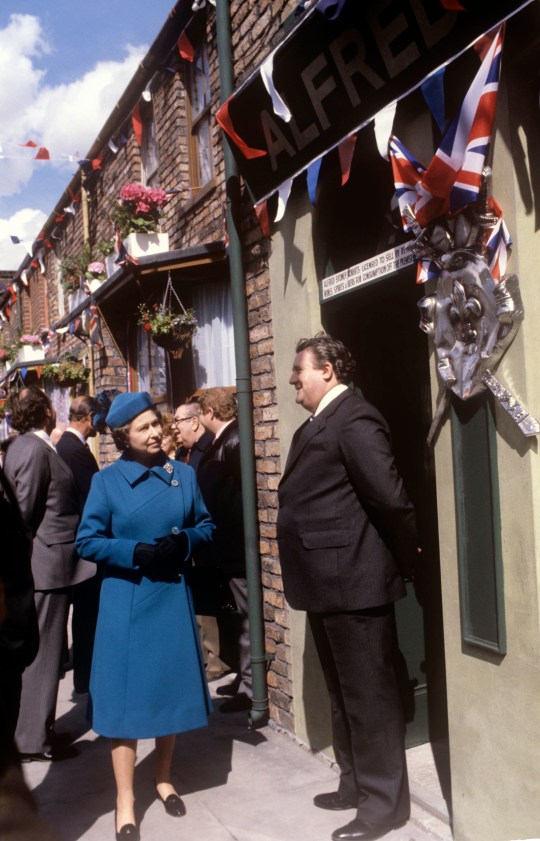 The Queen met with a number of the show’s cast at the time (Picture: PA)

Her Majesty’s first trip to the land of all-things serial drama came in 1982, when Coronation Street – which was hugely popular at the time – moved production to a new outdoor set.

The Queen and Prince Phillip arrived on the set on May 5 of the year in question to declare the set officially open.

The event was considered so significant at the time that it was broadcast live on ITV in a programme titled The Queen in Coronation Street. 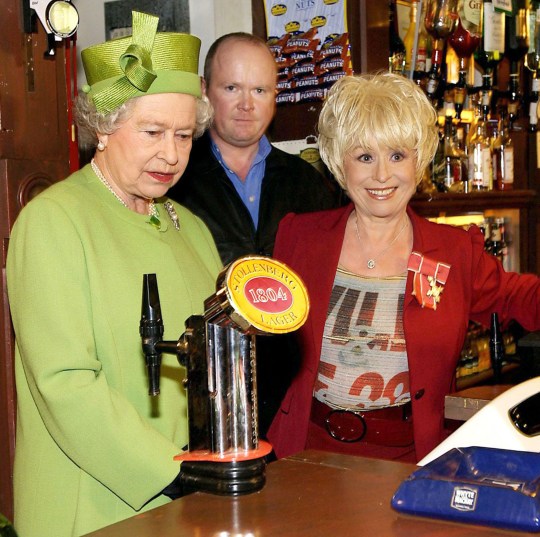 The Queen stopped by EastEnders in 2001 (Picture: PA)

Queen Elizabeth ventured into the world of soap once more on November 28, 2001 when she and Prince Phillip paid a visit to the set of EastEnders, which was enjoying one of its best ever periods at the time – both storyline-wise and popularity-wise.

The Royal couple were given a 45-minute tour of Albert Square, Walford, and the surrounding areas by none other than Peggy Mitchell star Barbara Windsor and Wendy Richard, who portrayed Pauline Fowler in the iconic soap. 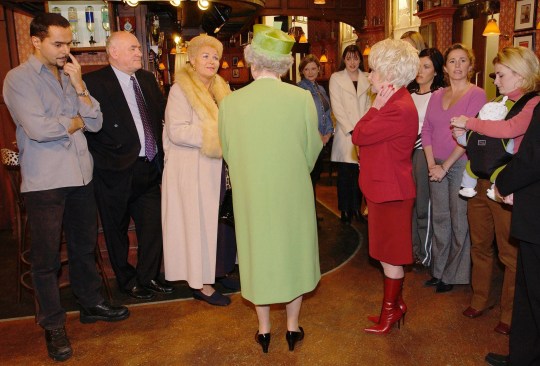 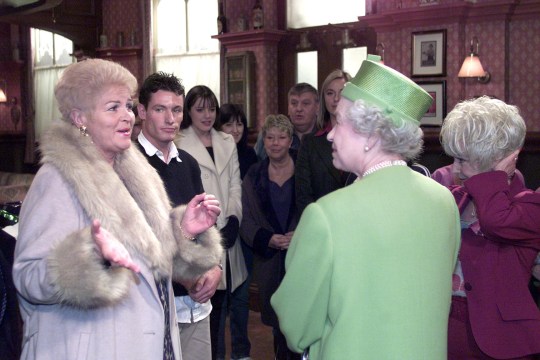 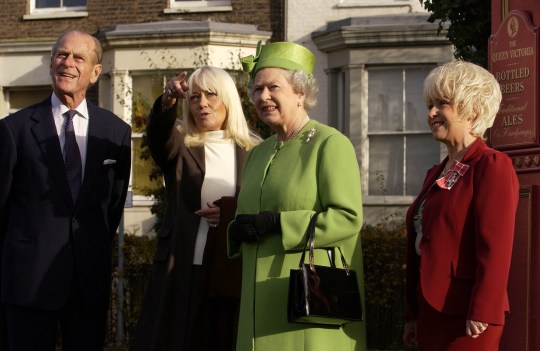 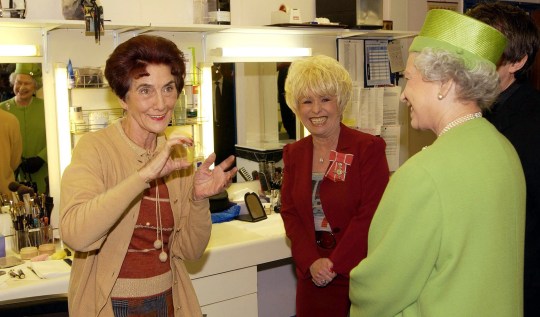 Dot Cotton legend June Brown, pictured with Barbara, met with The Queen during her visit to Walford (Picture: PA)

Barbara said at the time: ‘I know she isn’t an EastEnders fan but it’s lovely she’s here. I am a royalist – I love the Prince of Wales – and Camilla watches EastEnders.’

The Queen was pictured behind the bar of The Queen Vic with Barbara and Steve McFadden, who plays Peggy’s on-screen son Phil Mitchell.

What a truly incredible moment. 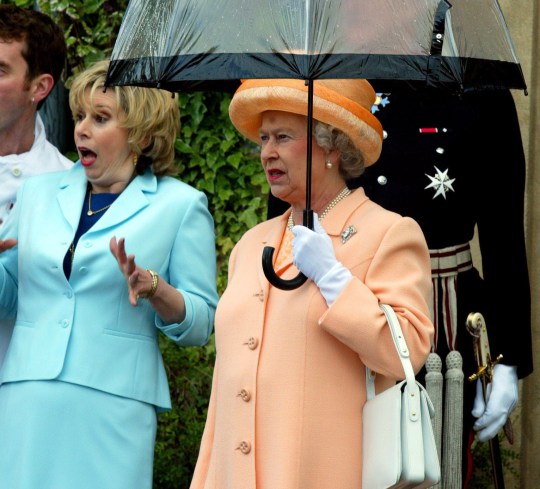 The Queen was unfazed as the post office was blown up as part of a storyline (Picture: PA) 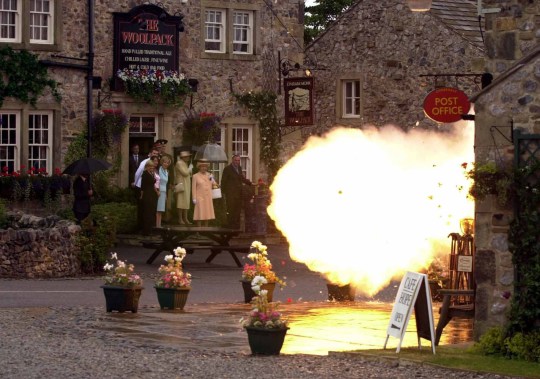 Emmerdale received a visit from The Queen the very following year, when she arrived in the not-so-sleepy little village in 2002.

Much like her visit to Walford, the monarch was given a tour of the ITV soap’s set, which lasted 40 minutes, and she he was shown the bed and breakfast, and of course, the serial drama’s signature pub The Woolpack.

The show’s post office was blown up while The Queen was present as part of as storyline, and while Elizabeth Estensen – who played Diane Sugden, pictured above – was taken aback by the explosion, Queen Elizabeth was reportedly unfazed. 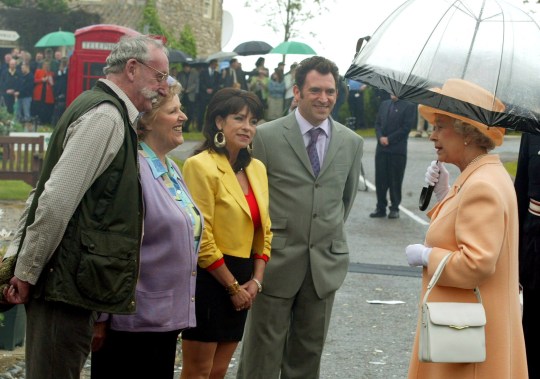 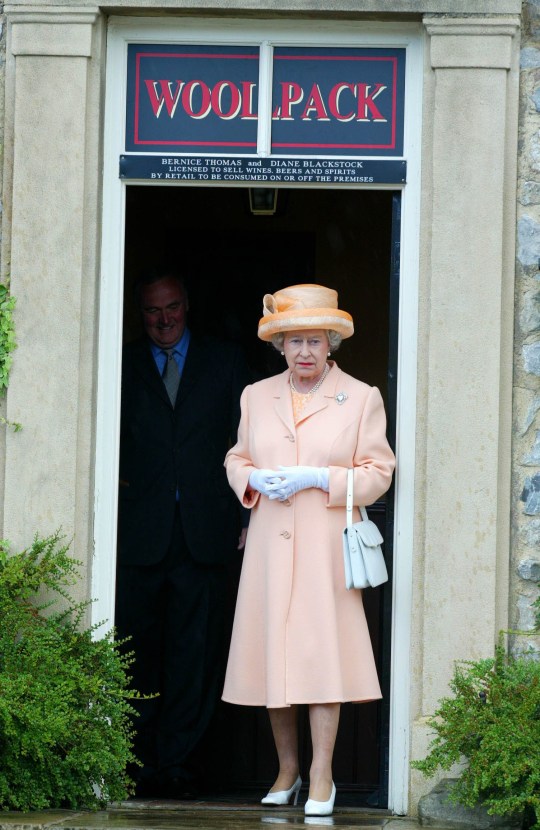 The Royal pictured outside Emmerdale’s signature pub The Woolpack during her visit to the show’s set (Picture: PA) 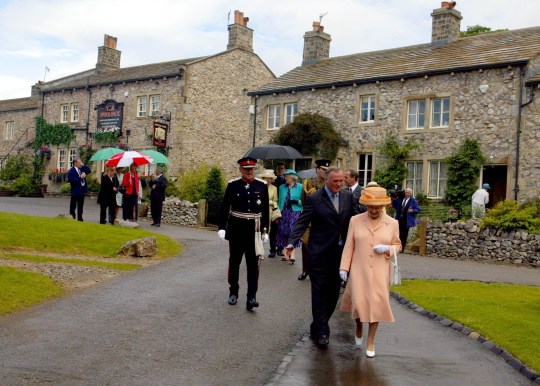 The Queen’s visit to Emmerdale came around the same time as her Golden Jubilee (Picture: PA)

‘She was cool as a cucumber when the explosion went off’ said Mark Charnock, who plays Marlon Dingle. ‘The rest of us jumped out of our skins.’

Paula Tilbrook said at the time that, while knowing The Queen Mother watched Emmerdale, she didn’t want to ask if Queen Elizabeth herself did, as she thought it might be a bit ’embarrassing’. 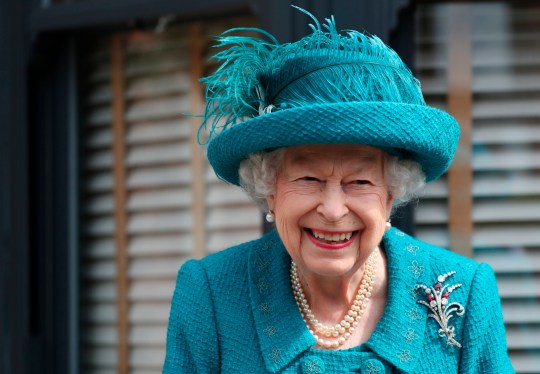 Her Majesty would set foot on the cobbles again on July 8, 2021 – 40 years after the previous visit.

She took a stroll down the cobbled streets of Weatherfield, met some of the longest-serving cast members and even paid a visit to the Rovers Return. 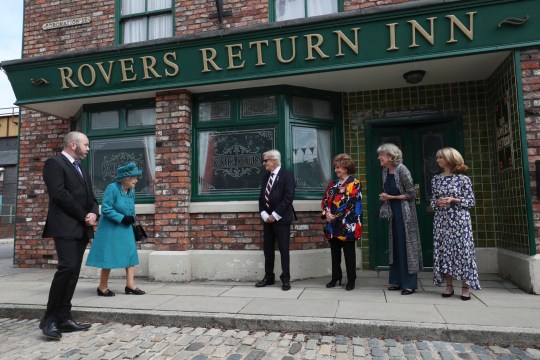 The monarch walked the famous cobbles for the first time in 40 years (Picture: Getty) 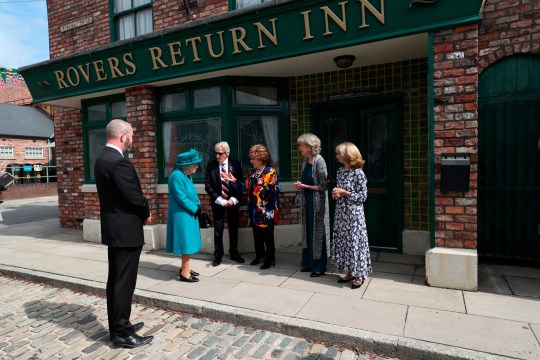 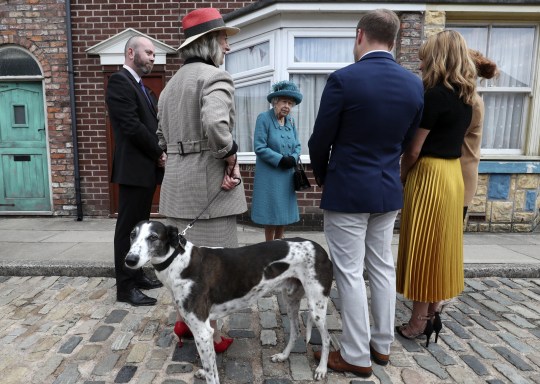 Among the many people she met during her visit, she interacted with Coronation Street boss Iain MacLeod, stars William Roache, Barbara Knox, Sue Nicholls and Helen Worth.

Coronation Street, at the time, had undergone some changes filming-wise due to the ongoing coronavirus pandemic, and the soap stars present on the day in question told Her Majesty all about them.

They explained how the team only paused filming for a couple of weeks during the first national lockdown but still managed to broadcast continuously. 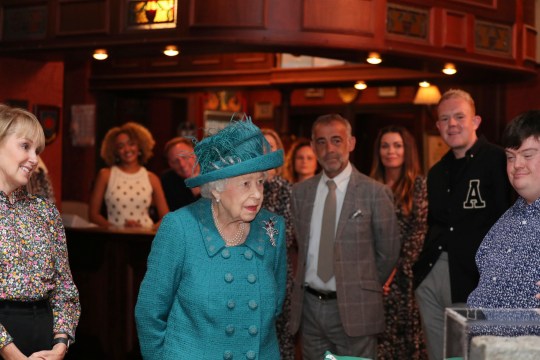 Her Majesty was given a tour of the Rovers Return indoor set as well (Picture: AP) 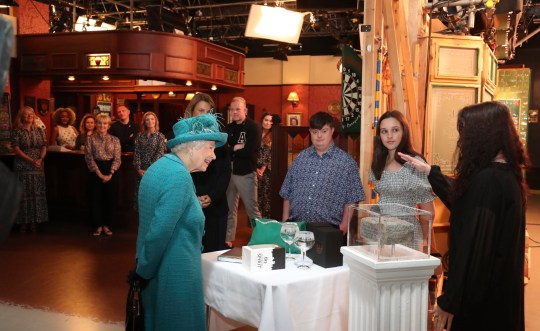 ITV’s CEO Dame Carolyn McCall showed the monarch to Studio 1, where she met with more cast members in the set of the Rovers Return.

Her Majesty spoke to Charlotte Jordan and Ruxandra Porojnicu, who play Daisy Midgeley and Alina Pop. 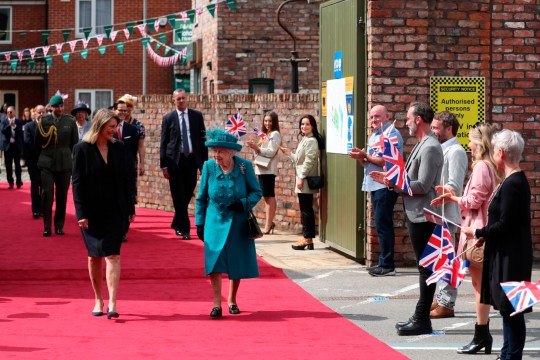 The Queen arriving on the set of Coronation Street last year (Picture: AP)

Charlotte told the Queen about her character Daisy, adding how much she enjoys playing the character.

If you’ve got a soap or TV story, video or pictures get in touch by emailing us soaps@metro.co.uk – we’d love to hear from you.

Join the community by leaving a comment below and stay updated on all things soaps on our homepage.

MORE : The Queen on screen: 12 times Her Majesty was portrayed in film and TV roles